A PoC backbone for NFT Marketplaces on NEAR Protocol.

There are 3 potential solutions:

Matt's opinion: Option (2/3) is the best UX and also allows your sale listings to be the most accurate and up to date. If you're implementing a marketplace, you most likely are running backend somewhere with the marketplace owner account. If you go with Option 3 you can simply update a list of "invalid sales" and filter these before you send the sales listings to the client. If you decided to go with 2, modify the marketplace remove_sale to allow your marketplace owner account to remove any sales. 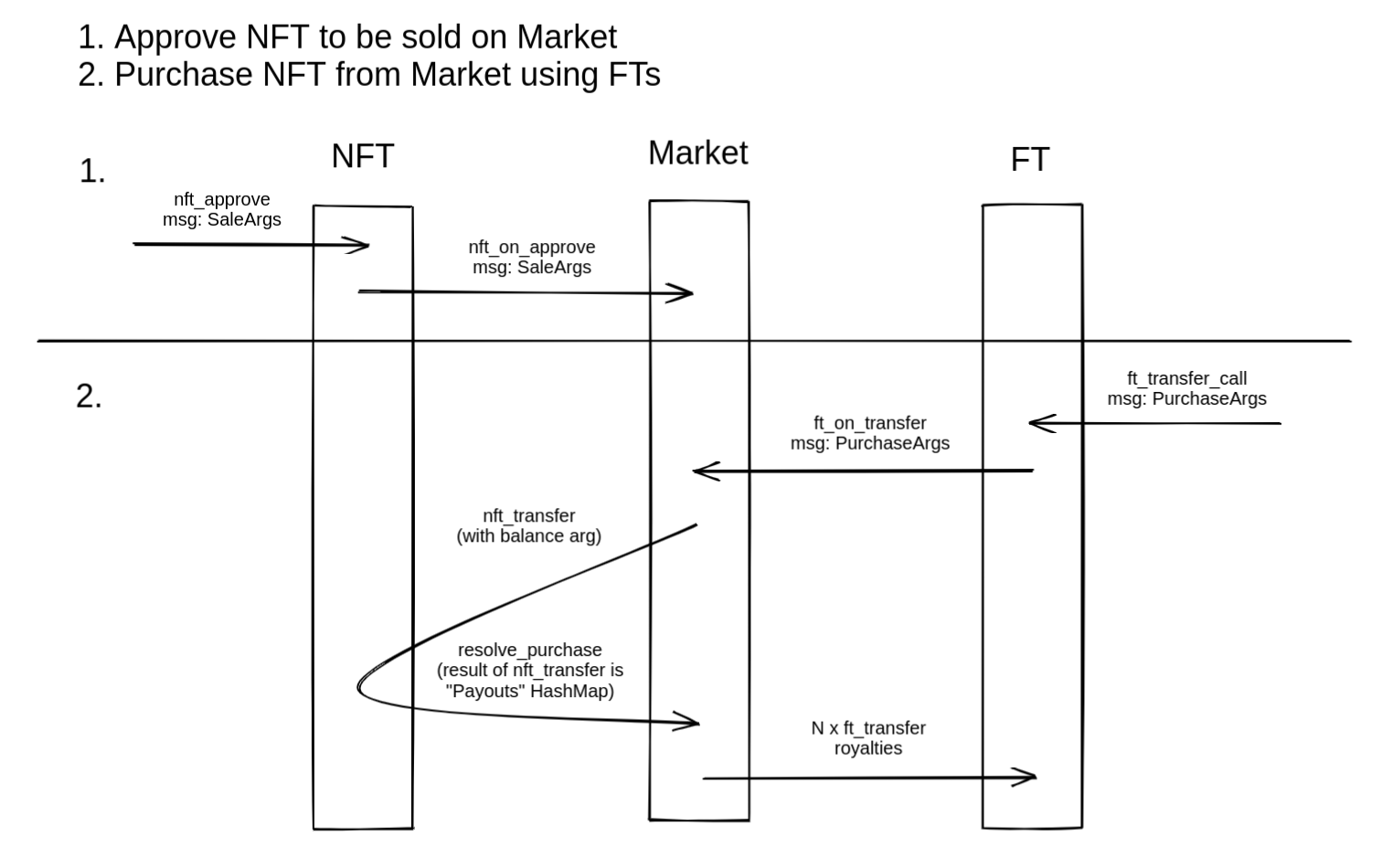 Remove the FT steps for NEAR transfers (but nft_transfer_payout and resolve_purchase still the same). 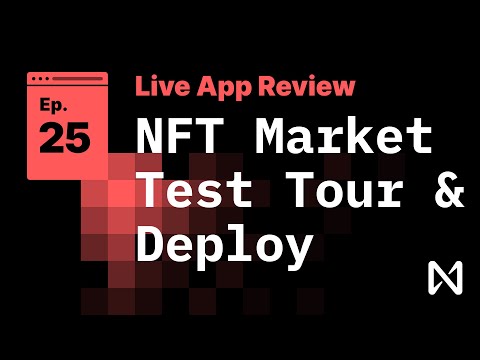 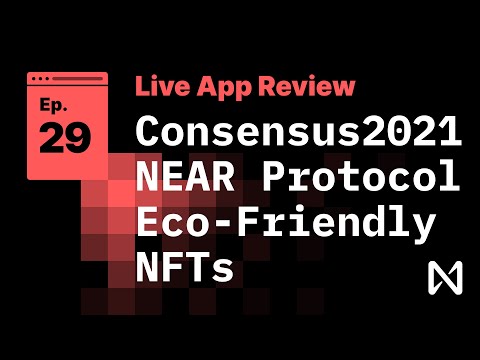 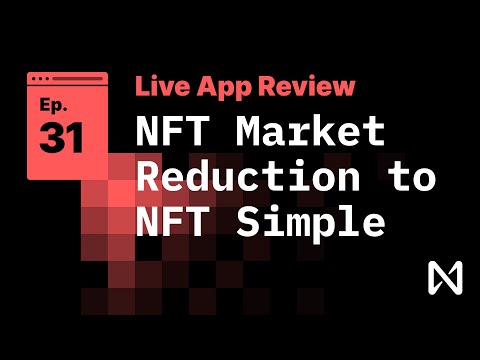 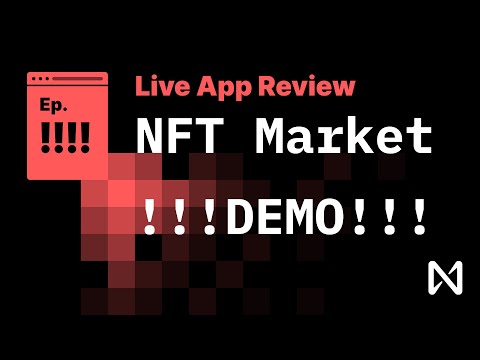 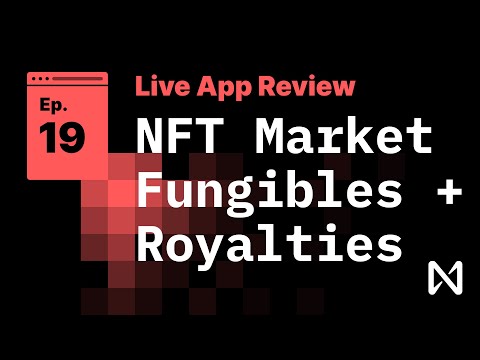 Some additional ideas around user onboarding: 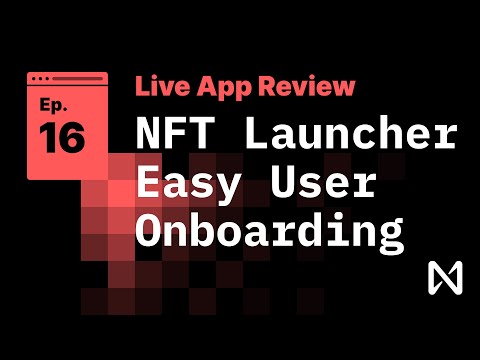 If you don't have Rust

If you have never used near-cli

Installing and Running Tests for this Example

This is just for testing. You can obviously deploy a token to a fixed address on testnet / mainnet, it's an easy config update.

When you run app / server tests. There's a contract deployed and a special account created guests.OWNER_ACCOUNT_ID to manage the sponsored users (the ones you will pay for gas fees while onboarding). This special "guests" account is different from the test guest account bob.TOKEN_ID.OWNER_ACCOUNT_ID. It is an account, different from the owner or token accounts, that manages the guests keys.

The guest users can claim_drop, ft_transfer_guest and receive tokens from other users, e.g. in the server tests the owner transfers tokens to the guest account via API call and using client side code.

Then, following the server tests, the guest transfers tokens to alice (who is a real NEAR account e.g. she pays her own gas).

Finally, the guest upgrades themselves to a real NEAR account, something demoed in the video.

It's a lot to digest but if you focus on the /test/app.test.js you will start to see the patterns.

One of the issues with onboarding new users to crypto is that they need to have crypto to do anything e.g. mint an NFT. A creator, artist or community might want to drop a bunch of free minting options to their fans for them to mint user generated content, but the audience has (1) no crypto to pay for fees (2) no wallet (3) no concept of crypto or blockchain; prior to the drop.

So let's solve these issues by allowing users to generate content the traditional Web2 way!

We do a demo of creating a "guest" named account for an app where the gas fees are sponsored by a special app account called "guests.APP_NAME.near". The guest account doesn't exist (sometimes called a virtual or contract account) until the user creates and sells and NFT that generates some NEAR tokens and then they can upgrade to a real account. Until then their name is reserved because only the app is able to create "USERNAME.APP_NAME.near".

This has many advantages for user onboarding, where users can use the app immediately and later can be upgraded to a full account. The users also don't have to move any assets - namely the fungible tokens they earned as a guest user.

Beyond having npm and node (latest versions), you should have Rust installed. I recommend nightly because living on the edge is fun.

Everything else can be installed via: yarn cd server && yarn

There is only one config.js file found in src/config.js, this is also used for running tests.

Using src/config.js you can set up your different environments. Use REACT_APP_ENV to switch environments e.g. in package.json script deploy.

You can run unit tests in the Rust contracts themselves, but it may be more useful to JS tests against testnet itself.

Note: to run the app and server tests make sure you install and start the server.

If you've changed your contract or your dev account has run out of funds use test:deploy, if you're updating your JS tests only then use test.

There are helpers in test/test-utils.js that take care of:

You can change the default funding amount for test accounts in src/config.js

Using the NEAR Config in your app

In src/state/near.js you will see that src/config.js is loaded as a function. This is to satisfy the jest/node test runner.

You can destructure any properies of the config easily in any module you import it in like this:

Note the export const in the destructuring?

The following steps describe how to use src/utils/state to create and use your own store and StateProvider.

When a function is called using dispatch, it expects arguments passed in to the outer function and the inner function returned to be async with the following json args: { update, getState, dispatch }

Example of a call:

All dispatched methods and update calls are async and can be awaited. It also doesn't matter what file/module the functions are in, since the json args provide all the context needed for updates to state.

The default names the State factory method returns are store and Provider. However, if you want multiple stores and provider contexts you can pass an additional prefix argument to disambiguate.

The updating of a single store, even several levels down, is quite quick. If you're worried about components re-rendering, use memo:

When the button is clicked, the component HelloMessage will not re-render, it's value has been memoized (cached). Using this method you can easily prevent performance intensive state updates in further down components until they are neccessary.

EVM → NEAR evm2near is a project for compiling EVM bytecode into wasm bytecode, with the particular goal of having that wasm artifact be executable on 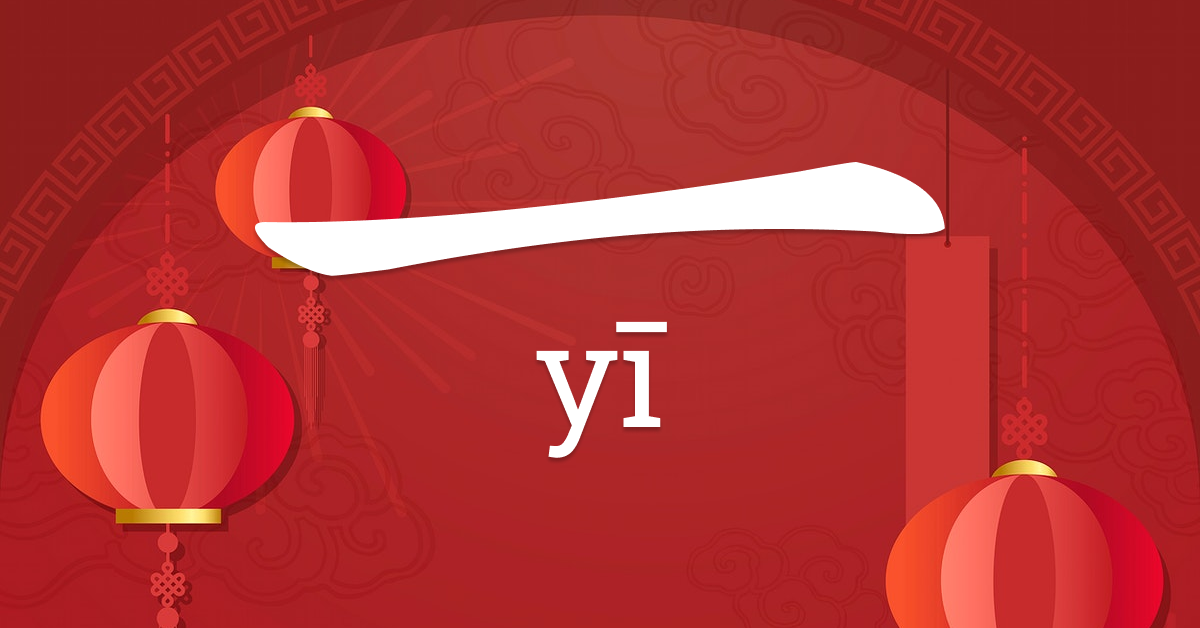 Metaplex is a protocol built on top of Solana that allows: Creating/Minting non-fungible tokens;

Metaplex is a protocol built on top of Solana that allows: Creating/Minting non-fungible tokens; Starting a variety of auctions for primary/secondary

A contract to lock fungible tokens with a given vesting schedule including cliffs.

Fungible Token Lockup contract Features A reusable lockup contract for a select fungible token. Lockup schedule can be set as a list of checkpoints wi 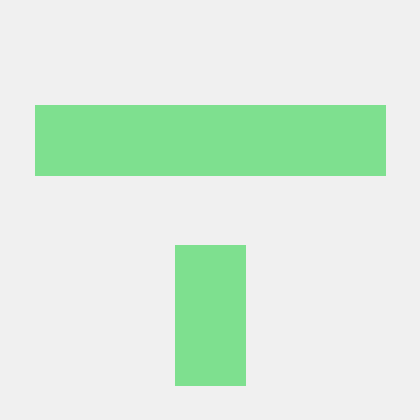 Zingolib This repo provides both a library for zingoproxyclient and zingo-mobile, as well as an included cli application to interact with zcashd via l

git clone and go, generator fodder, boilerplates for tutorials - a more informal and less "how to code" version of near-examples

Solana_Marketplace_HerosNFT The Heros NFT Marketplace Boilerplate project is designed to let users fork, customize, and deploy their own nft marketpla

ARYA Network is a polkadot/substrate based chain for Non-fungible Token platform on which we can own sell and buy the NFT's on polkadot network.

Bespoke toolkit for Non-fungible token (NFT) technology ?? What is Onft? Instead of forcing a consensus algorithm or peer networking on you, Onft prov

NFT Marketplace project This contract is an example for the NFT marketplace implementation. License Apache 2.0 ??️ How to use - Contracts ?? Build Use

All the data an IC app needs to make seamless experiences, accessible directly on the IC. DAB is an open internet service for NFT, Token, Canister, and Dapp registries.

Dfinity's fungible token standard. Any PRs and comments are welcome,collaborate with us to build this standard

Dfinity's fungible token standard. Any PRs and comments are welcome,collaborate with us to build this standard

A tutorial for an NFT Market Place Built with Near Protocol and React.js

nft-marketplace-part-1 A tutorial for an NFT Market Place built using Near Protocol and React.js. Preview To run this app locally, follow below steps:

Examples and helpers to build NFT contracts on CosmWasm

CosmWasm NFTS This repo is the official repository to work on all NFT standard and examples in the CosmWasm ecosystem. cw721 and cw721-base were moved