Terabethia - A Bridge Between Ethereum & the Internet Computer

Terabethia is a bridge between Ethereum & the Internet Computer that contracts in both chains can use to message each other, and that Ethereum assets (ERC20, ERC721, & ERC1155) can use to be automatically mirrored & used on the IC through Terabethia's Magic Proxy & Token Factory, which will deploy wrapped versions of those assets programmatically with equivalent standards on the IC (DIP20, DIP721, DIP1155).

Important: This is an early look at Terabethia's repository, but it does not reference the final or upcoming test-net implementation. Don't consider the repository as a stable or complete release yet. We will further document, polish, and add-in key pieces to the Magic Proxy, the bridge, and more soon.

On this repository you can find early iterations of: 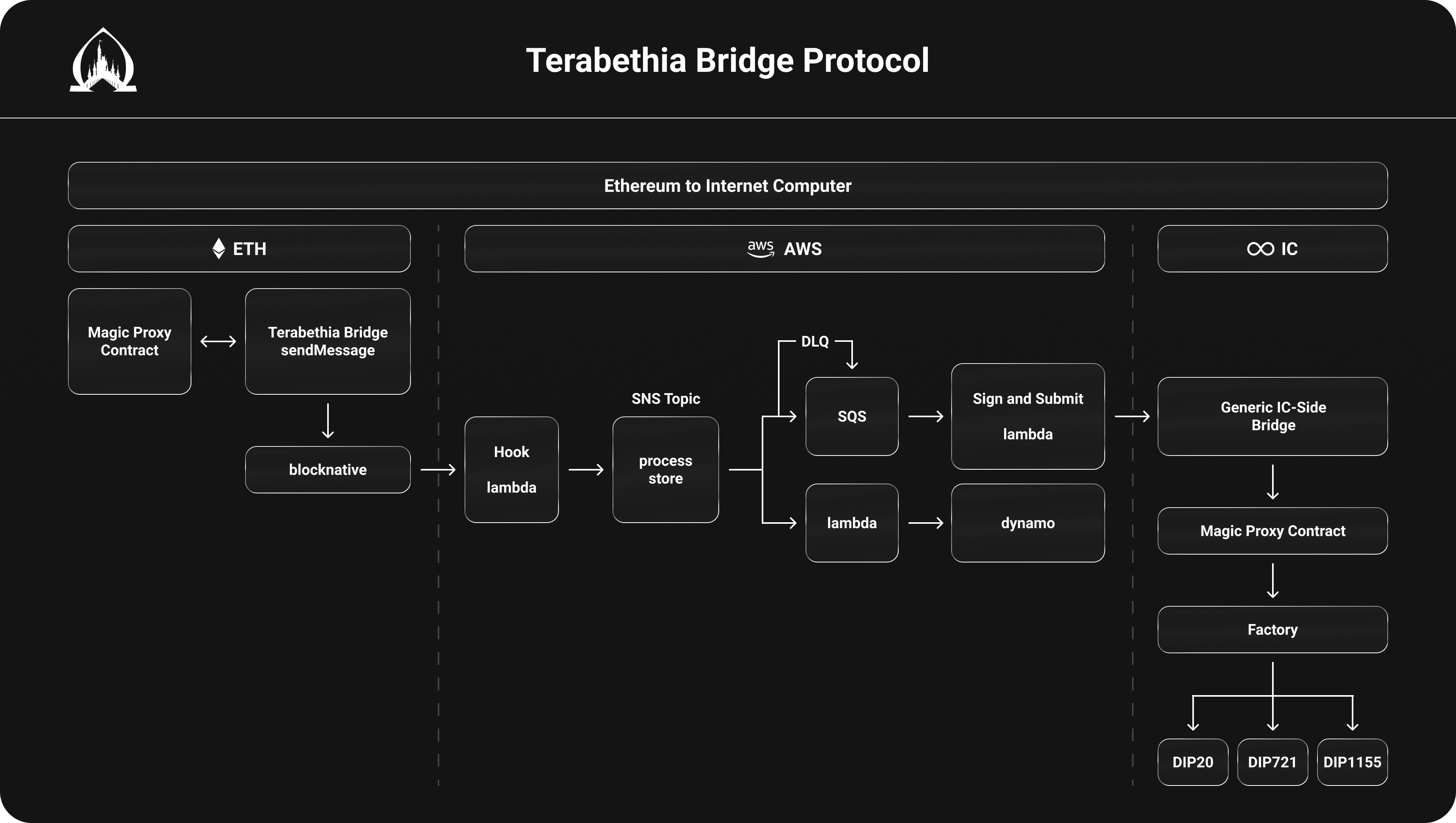 As seen in the graphic above, Terabethia's architecture is composed of the following pieces:

The State Sync Infrastructure will be removed from AWS once the native IC/Ethereum integration goes live (at which point this piece can be built in a canister on the IC). However starting with this piece being centralized is common practice for many bridges. 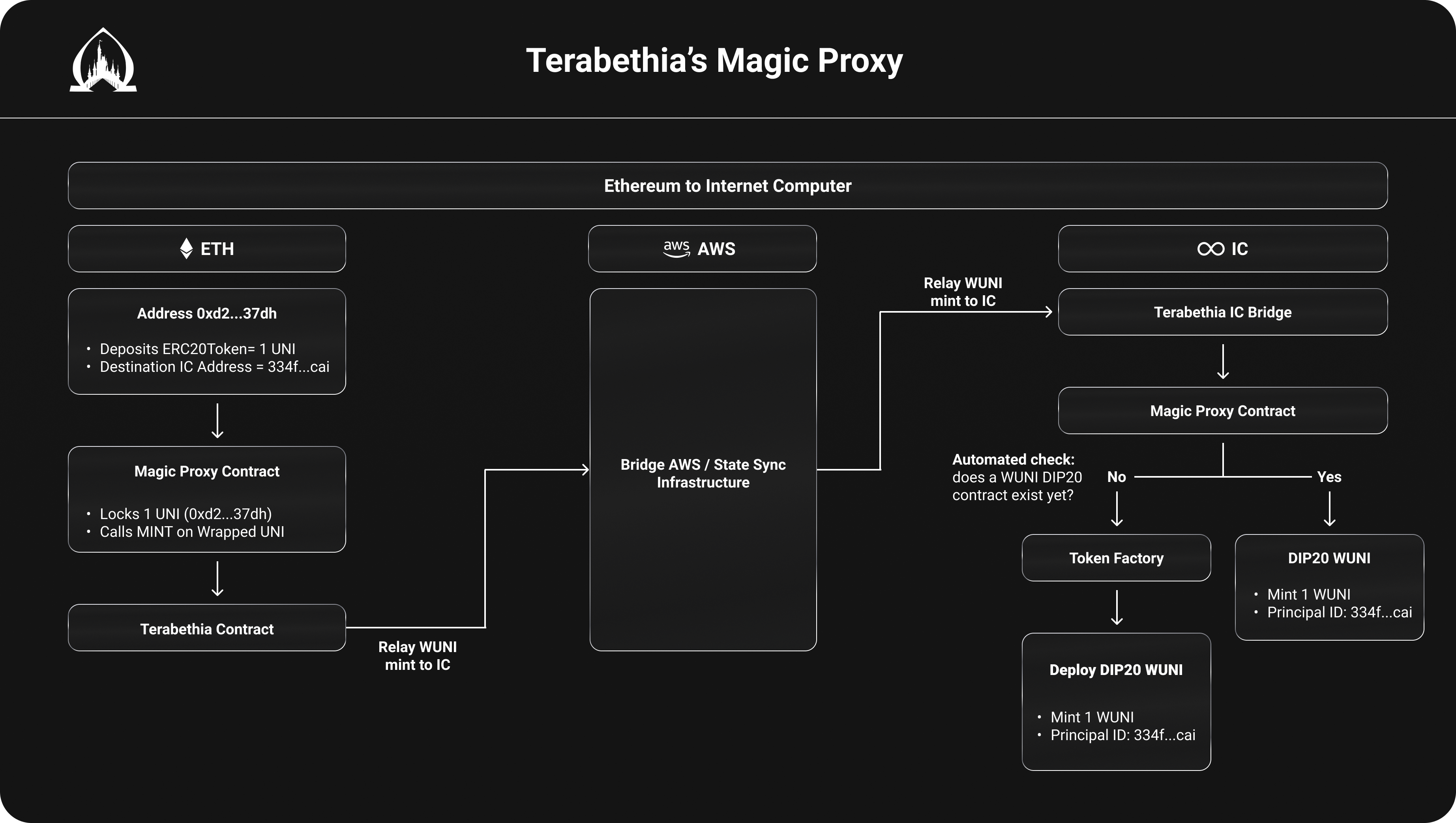 One of the magic pieces is that it includes a built-in wrapped token factory on the Internet Computer that's in charge of deploying the mirrored ERC20 contracts to the IC using equivalent standards we've developed: DIP20, DIP, 721, & DIP1155 (coming soon).

There are two magic proxy contracts, one on Ethereum and another on the Internet Computer that can communicate with each other through Terabethia.

They will automatically allow anyone to send ERC20 tokens (and soon ERC721 & ERC1155) to the IC and benefit from its L2-like benefits (low fees, fast transactions, etc.) and other unique features (enhanced compute/storage capabilities, hosting/serving front ends directly from smart contracts, native IC/ETH integration, etc.) without needing to modify or rewrite any contracts or code.

A preview of the integration between Bitcoin and the Internet Computer.

A value transfer bridge between the Monero blockchain and the Secret Network.

A bridge between different serde implementations.

The Internet Computer is the world’s first blockchain that runs at web speed and can increase its capacity without bound. Like the Internet (which is composed of many machines adhering to TCP/IP protocol) and blockchain protocols (such as Bitcoin and Ethereum).

Rust library for build smart contracts on Internet Computer, by the Spinner.Cash team.

Spinner Rust library for building smart contracts on the Internet Computer. More specifically it is used by Spinner.Cash, a decentralized layer-2 prot

A demo of the Internet Computer's Bitcoin API

Bitcoin Integration Demo A demo of the bitcoin endpoints on the Internet Computer. This demo is already deployed to the IC, so you can already try it

MangoBOX is a fork and upgrade of fund-raising protocol Juicebox on Ethereum.

Mangoboxink MangoBOX is a fork and upgrade of fund-raising protocol Juicebox on Ethereum. It rewrites the logic and functions of Juicebox in the smart

Next-generation implementation of Ethereum protocol ("client") written in Rust, based on Erigon architecture.

?? Martinez ?? Next-generation implementation of Ethereum protocol ("client") written in Rust, based on Erigon architecture. Why run Martinez? Look at 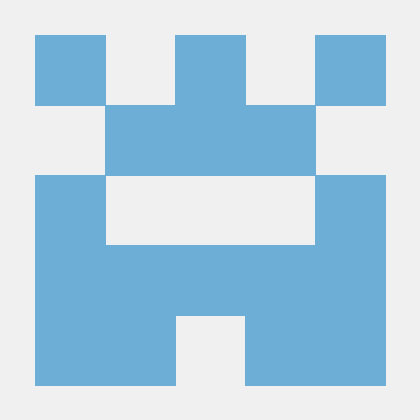 The Phala Network Blockchain, pRuntime and the bridge.

filecoindot A Substrate pallet to bridge from Filecoin to any blockchain built using the Substrate framework, including Polkadot parachains. How to in

Introduction Implementation of a https://darwinia.network node in Rust based on the Substrate framework. This repository contains runtimes for the Dar