A Rust library for the Marlin preprocessing zkSNARK

marlin is a Rust library that implements a

preprocessing zkSNARK for R1CS
with
universal and updatable SRS

This library was initially developed as part of the Marlin paper, and is released under the MIT License and the Apache v2 License (see License).

WARNING: This is an academic prototype, and in particular has not received careful code review. This implementation is NOT ready for production use.

A zkSNARK with preprocessing achieves succinct verification for arbitrary computations, as opposed to only for structured computations. Informally, in an offline phase, one can preprocess the desired computation to produce a short summary of it; subsequently, in an online phase, this summary can be used to check any number of arguments relative to this computation.

The preprocessing zkSNARKs in this library rely on a structured reference string (SRS), which contains system parameters required by the argument system to produce/validate arguments. The SRS in this library is universal, which means that it supports (deterministically) preprocessing any computation up to a given size bound. The SRS is also updatable, which means that anyone can contribute a fresh share of randomness to it, which facilitates deployments in the real world.

The construction in this library follows the methodology introduced in the Marlin paper, which obtains preprocessing zkSNARKs with universal and updatable SRS by combining two ingredients:

The first ingredient is provided as part of this library, and is an efficient algebraic holographic proof for R1CS (a generalization of arithmetic circuit satisfiability supported by many argument systems). The second ingredient is imported from poly-commit. See below for evaluation details.

The library compiles on the stable toolchain of the Rust compiler. To install the latest version of Rust, first install rustup by following the instructions here, or via your platform's package manager. Once rustup is installed, install the Rust toolchain by invoking:

After that, use cargo (the standard Rust build tool) to build the library:

This library comes with some unit and integration tests. Run these tests with:

Lastly, this library is instrumented with profiling infrastructure that prints detailed traces of execution time. To enable this, compile with cargo build --features print-trace.

All benchmarks below are performed over the BLS12-381 curve implemented in the ark-bls12-381 library, with the asm feature activated. Benchmarks were run on a machine with an Intel Xeon 6136 CPU running at 3.0 GHz.

The graphs below compare the running time, in single-thread execution, of Marlin's indexer, prover, and verifier algorithms with the corresponding algorithms of Groth16 (the state of the art in preprocessing zkSNARKs for R1CS with circuit-specific SRS) as implemented in groth16. We evaluate Marlin's algorithms when instantiated with the PC scheme from [CHMMVW20] (denoted "M-AHP w/ PC of [CHMMVW20]"), and the PC scheme from [MBKM19] (denoted "M-AHP w/ PC of [MBKM19]"). 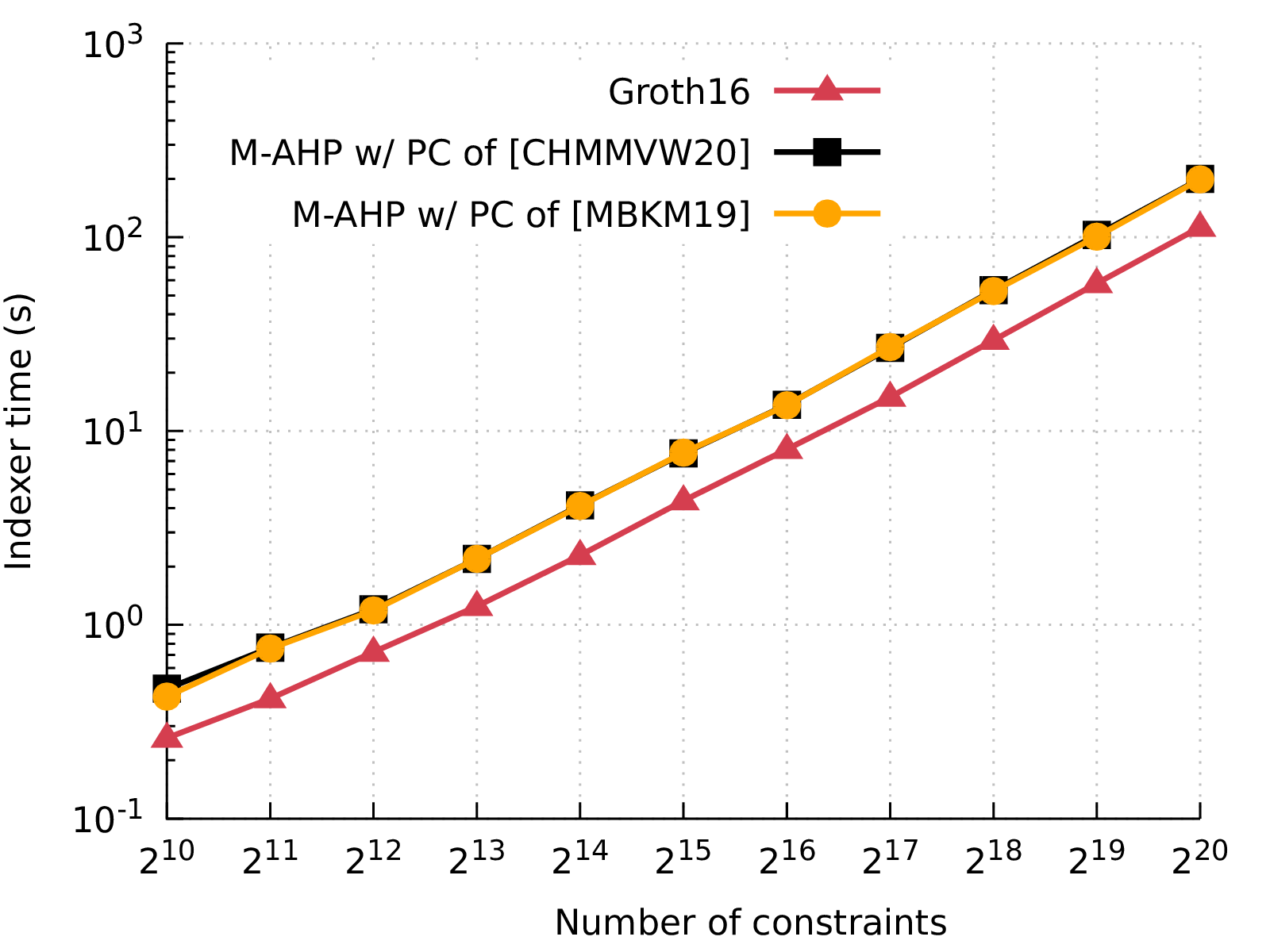 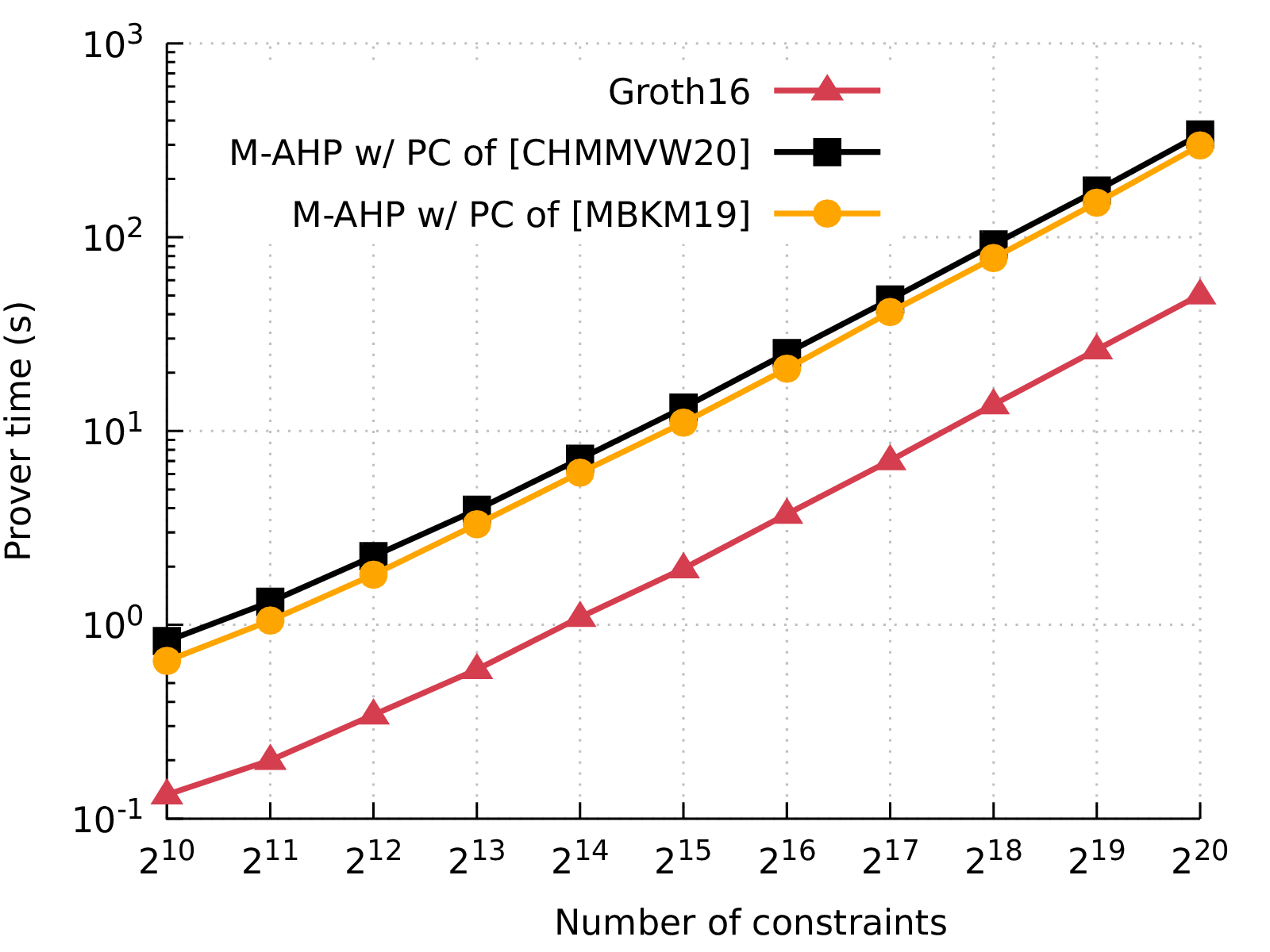 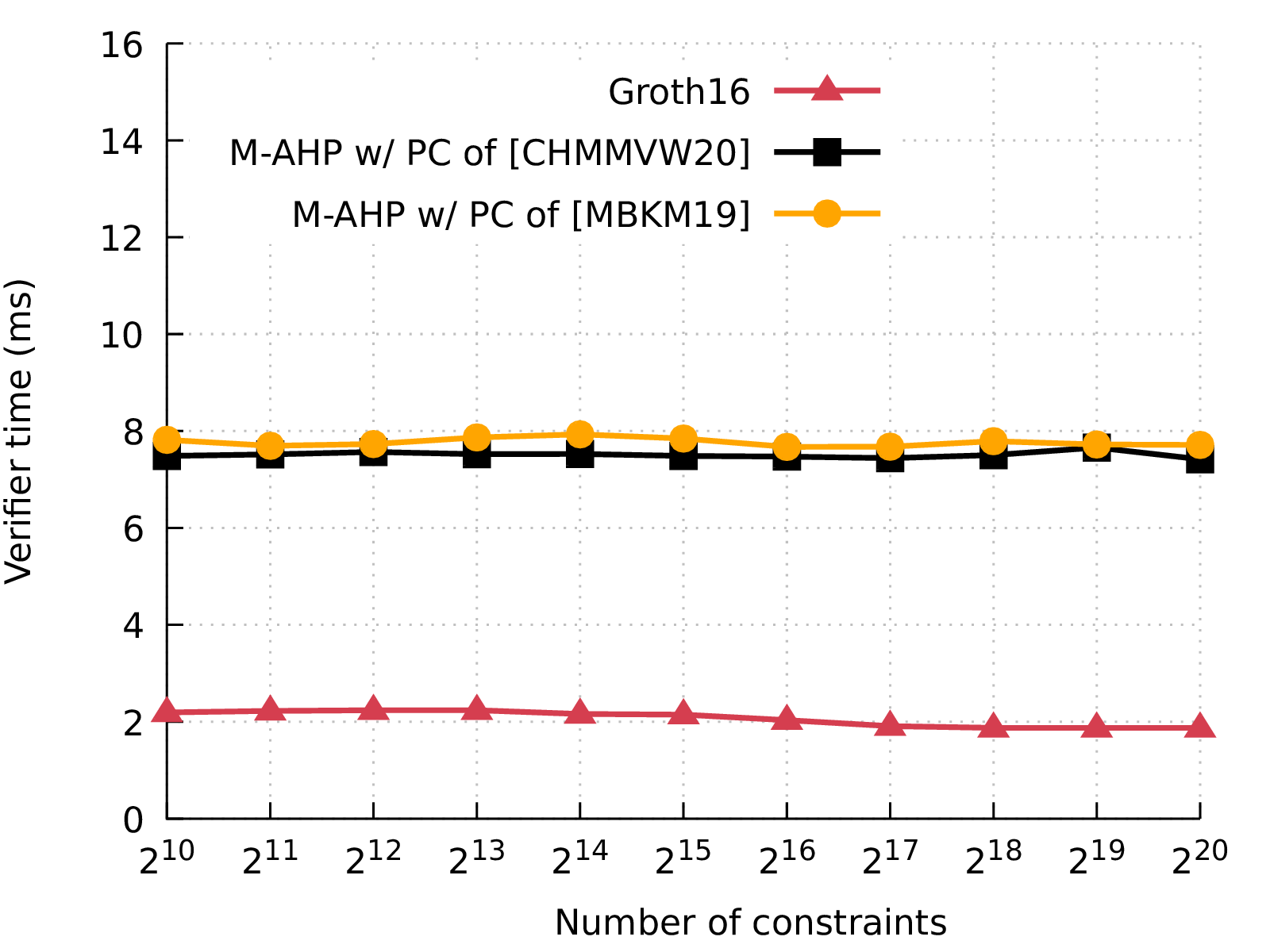 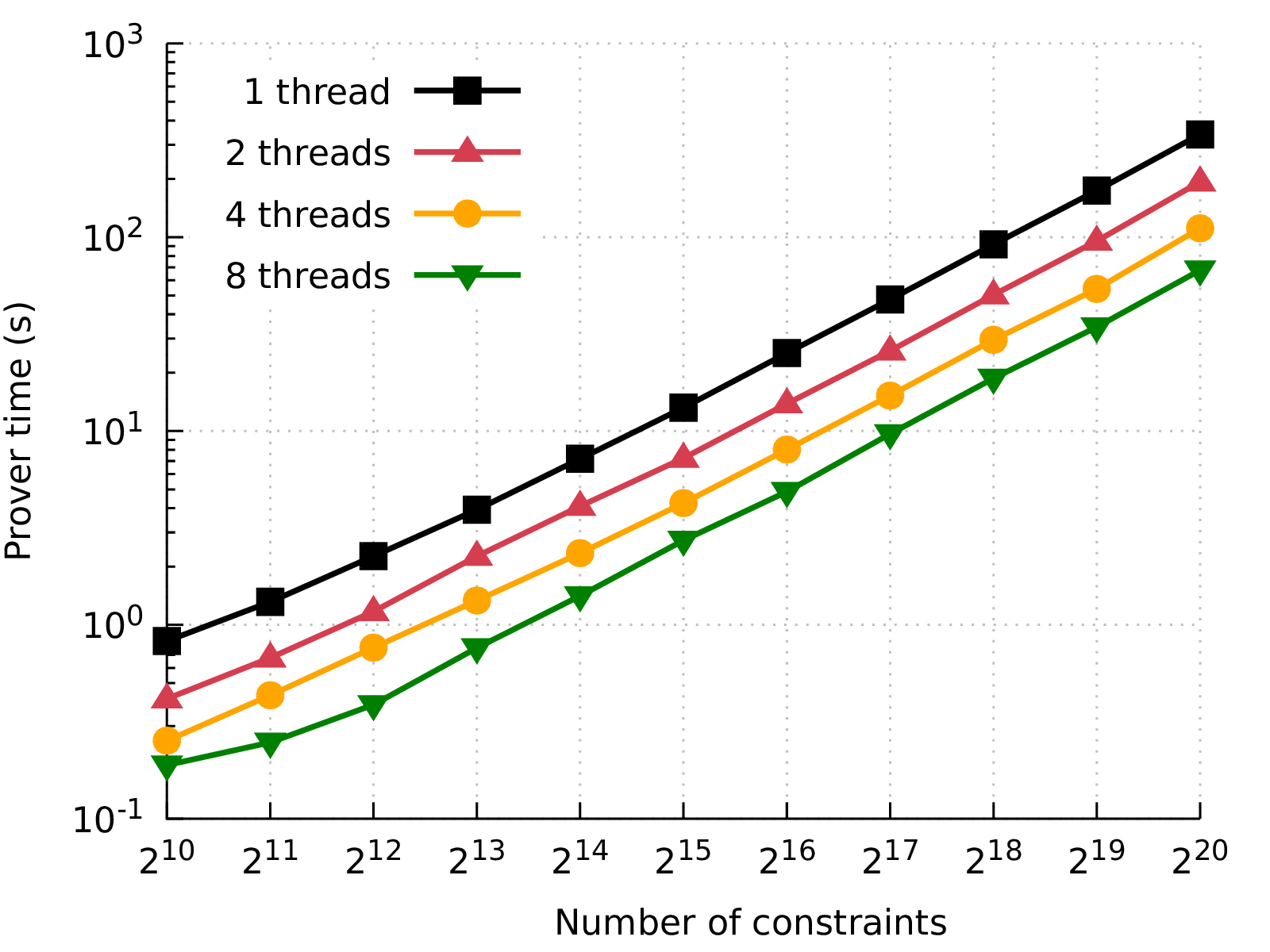 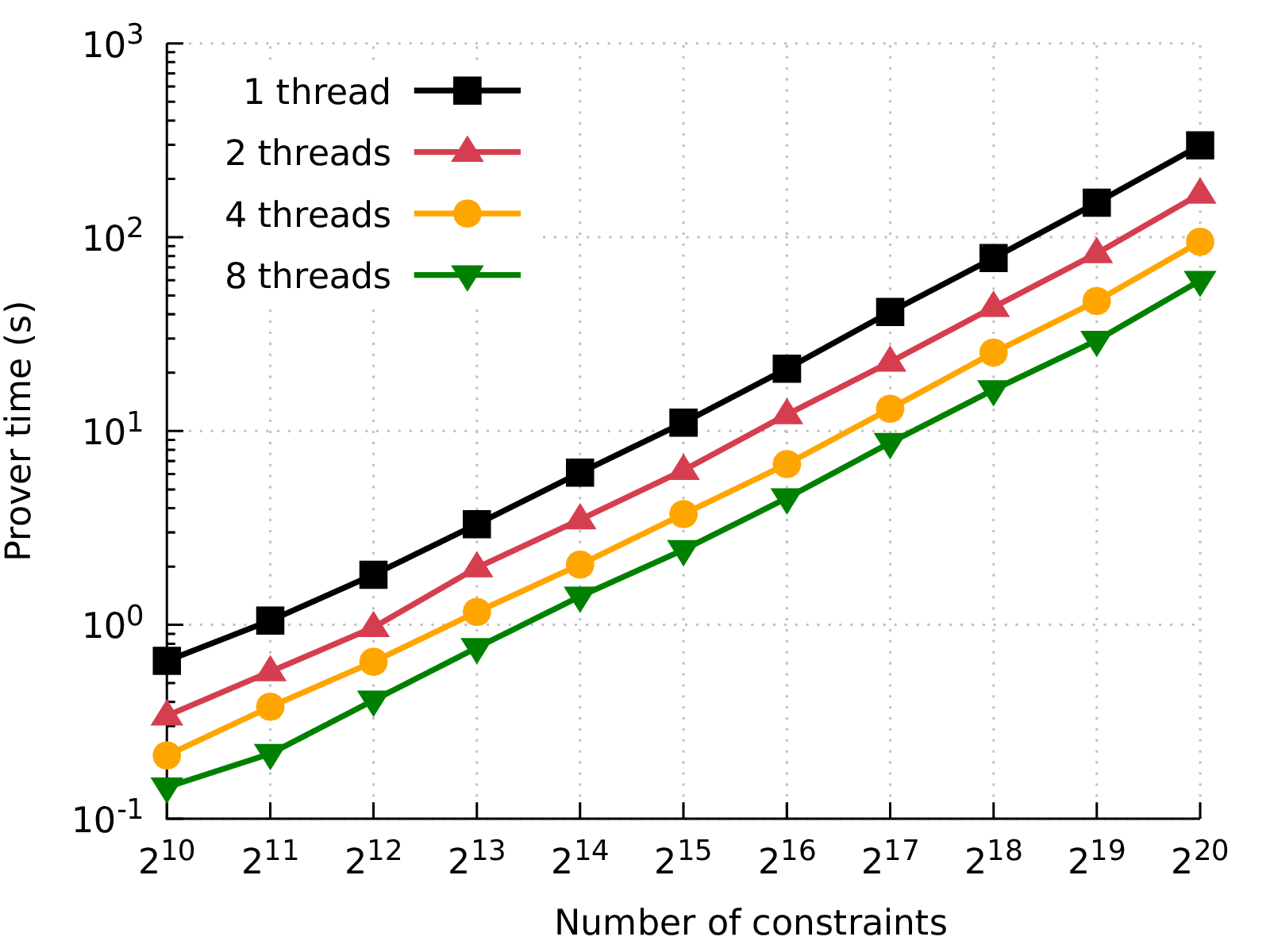 This library is licensed under either of the following licenses, at your discretion.

Unless you explicitly state otherwise, any contribution that you submit to this library shall be dual licensed as above (as defined in the Apache v2 License), without any additional terms or conditions.

This work was supported by: an Engineering and Physical Sciences Research Council grant; a Google Faculty Award; the RISELab at UC Berkeley; and donations from the Ethereum Foundation and the Interchain Foundation.

An ecosystem for developing and programming with zkSNARKs

Light Protocol DISCLAIMER: THIS SOFTWARE IS NOT AUDITED. Do not use in production! Tests cd ./program && cargo test-bpf deposit_should_succeed cd ./pr

blind-ovote Blind-OVOTE is a L2 voting solution which combines the validity rollup ideas with blind signatures over elliptic curves inside zkSNARK, to

A modern TLS library in Rust

Rustls is a modern TLS library written in Rust. It's pronounced 'rustles'. It uses ring for cryptography and libwebpki for certificate verification. S

Mundane is a Rust cryptography library backed by BoringSSL that is difficult to misuse, ergonomic, and performant (in that order).

Mundane Mundane is a Rust cryptography library backed by BoringSSL that is difficult to misuse, ergonomic, and performant (in that order). Issues and

The most advanced Merkle tree library for Rust

rs-merkle rs-merkle is the most advanced Merkle tree library for Rust. Basic features include building a Merkle tree, creation, and verification of Me

A wallet library for Elements / Liquid written in Rust!

bn This is a pairing cryptography library written in pure Rust. It makes use of the Barreto-Naehrig (BN) curve construction from [BCTV2015] to provide

bn This is a pairing cryptography library written in pure Rust. It makes use of the Barreto-Naehrig (BN) curve construction from [BCTV2015] to provide

Aya is an eBPF library for the Rust programming language, built with a focus on developer experience and operability.

SewUp Secondstate EWasm Utility Program, a library helps you sew up your Ethereum project with Rust and just like development in a common backend. The

An implementation of the paper "Honey Badger of BFT Protocols" in Rust. This is a modular library of consensus.