Pure Data (Pd) is a visual programming language developed by Miller Puckette in the 1990s for creating interactive computer music and multimedia works. While Puckette is the main author of the program, Pd is an open-source project with a large developer base working on new extensions. It is released under BSD-3-Clause.

Though pd is designed as a desktop application, libpd is an open source project which exposes it as a C library opening the possibility to embed the functionality of pd to any platform which C can compile to.

libpd-rs aims to bring libpd to the Rust ecosystem. It aims to expose the full functionality of libpd with some extra additions such as bundling commonly used externals and addition of extra functionality for increased ease of use.

It is thoroughly documented, well tested and enriched with various examples to get you started right away.

Add the following dependencies to your Cargo.toml:

Paste the code into your main.rs:

Warning : This example will produce audio, so please keep your volume at a reasonable level for safety.

This is just the tip of the iceberg about what you can do with libpd.

The patch we had just evaluated would look like this in pd desktop application: 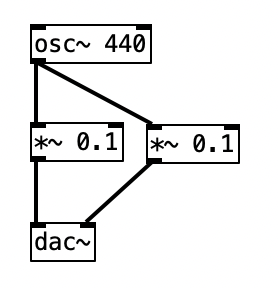 Running the examples and tests

Please check the README on examples for more information.

For the tests, you may run cargo test directly.

Please check the examples and tests directory if you're learning better when reading code.

Or if you would like to dive in to documentation please go ahead.

The way to add externals to libpd is to compile and statically link them.

libpd-rs will be bundling some of the essential and commonly used externals in pure data. This list will be growing as we add more externals.

If you have ideas please consider writing an answer to this post.

Generative or algorithmic music is a powerful tool for exploration, pumps up creativity and goes very well together with traditional music making approaches also.

Making apps which produce meaningful sound is difficult, I wish that this crate would ease your way on doing that and make complicated audio ideas in apps accessible to more people.

Spotify for the terminal written in Rust 🚀

Spotify TUI A Spotify client for the terminal written in Rust. The terminal in the demo above is using the Rigel theme. Spotify TUI Installation Homeb

A rust binding for the FMOD library

rust-fmod This is a rust binding for FMOD, the library developped by FIRELIGHT TECHNOLOGIES. FMOD website : www.fmod.org You can also find it on crate

ears ears is a simple library to play sounds and music in Rust. Provides an access to the OpenAL spatialization functionality in a simple way. Accepts

PortAudio bindings and wrappers for Rust.

Rust Music Theory A library and executable that provides programmatic implementation of the basis of the music theory. Table of Contents Overview Usag

A Rust environment for sound synthesis and algorithmic composition.

Sorceress A Rust environment for sound synthesis and algorithmic composition, powered by SuperCollider. Overview Sorceress is a Rust crate that provid

Implements the free and open audio codec Opus in Rust.

opus-native Overview Implements the free and open audio codec Opus in Rust. Status This crate is under heavy development. Most functionality is not wo mpc, but implemented in Rust.

rsmpc mpc, but implemented in Rust. Note: This is not meant to be a direct implementation, there will be some differences. For example: I moved the op

A music bot build in Serenity/Rust.

Sunny Flowers is a Discord bot to play media in voice channels. It uses Serenity and Songbird to accomplish this.

musify is a simple discord bot to play music within a voice channel, written in the rust programming language.

musify-rs musify is a simple discord bot to play music within a voice channel, written in the rust programming language. Features A simple song queue

Grail-rs (Work in progress) Grail, A simple formant speech synthesizer, built for portability This is the rust version The goal of this synthesizer is

A Spotify downloader written in rust, which does not require a premium account

DownOnSpot A Spotify downloader written in Rust Disclaimer DownOnSpot was not developed for piracy. It is meant to be used in compliance with DMCA, Se