Use rbenv to pick a Ruby version for your application and guarantee that your development environment matches production. Put rbenv to work with Bundler for painless Ruby upgrades and bulletproof deployments.

Powerful in development. Specify your app's Ruby version once, in a single file. Keep all your teammates on the same page. No headaches running apps on different versions of Ruby. Just Works™ from the command line and with app servers like Pow. Override the Ruby version anytime: just set an environment variable.

Rock-solid in production. Your application's executables are its interface with ops. With rbenv and Bundler binstubs you'll never again need to cd in a cron job or Chef recipe to ensure you've selected the right runtime. The Ruby version dependency lives in one place—your app—so upgrades and rollbacks are atomic, even when you switch versions.

One thing well. rbenv is concerned solely with switching Ruby versions. It's simple and predictable. A rich plugin ecosystem lets you tailor it to suit your needs. Compile your own Ruby versions, or use the ruby-build plugin to automate the process. Specify per-application environment variables with rbenv-vars. See more plugins on the wiki.

Why choose rbenv over RVM?

At a high level, rbenv intercepts Ruby commands using shim executables injected into your PATH, determines which Ruby version has been specified by your application, and passes your commands along to the correct Ruby installation.

When you run a command like ruby or rake, your operating system searches through a list of directories to find an executable file with that name. This list of directories lives in an environment variable called PATH, with each directory in the list separated by a colon:

Directories in PATH are searched from left to right, so a matching executable in a directory at the beginning of the list takes precedence over another one at the end. In this example, the /usr/local/bin directory will be searched first, then /usr/bin, then /bin.

rbenv works by inserting a directory of shims at the front of your PATH:

Through a process called rehashing, rbenv maintains shims in that directory to match every Ruby command across every installed version of Ruby—irb, gem, rake, rails, ruby, and so on.

Shims are lightweight executables that simply pass your command along to rbenv. So with rbenv installed, when you run, say, rake, your operating system will do the following:

When you execute a shim, rbenv determines which Ruby version to use by reading it from the following sources, in this order:

Once rbenv has determined which version of Ruby your application has specified, it passes the command along to the corresponding Ruby installation.

Each Ruby version is installed into its own directory under ~/.rbenv/versions. For example, you might have these versions installed:

Version names to rbenv are simply the names of the directories in ~/.rbenv/versions.

Compatibility note: rbenv is incompatible with RVM. Please make sure to fully uninstall RVM and remove any references to it from your shell initialization files before installing rbenv.

For a more automated install, you can use rbenv-installer. If you prefer a manual approach, follow the steps below.

This will get you going with the latest version of rbenv without needing a systemwide install.

If you've installed rbenv manually using Git, you can upgrade to the latest version by pulling from GitHub:

If you're using the rbenv install command, then the list of available Ruby versions is not automatically updated when pulling from the rbenv repo. To do this manually:

How rbenv hooks into your shell

Skip this section unless you must know what every line in your shell profile is doing.

rbenv init is the only command that crosses the line of loading extra commands into your shell. Coming from RVM, some of you might be opposed to this idea. Here's what rbenv init actually does:

Run rbenv init - for yourself to see exactly what happens under the hood.

The rbenv install command doesn't ship with rbenv out of the box, but is provided by the ruby-build project. If you installed it either as part of GitHub checkout process outlined above or via Homebrew, you should be able to:

Alternatively to the install command, you can download and compile Ruby manually as a subdirectory of ~/.rbenv/versions/. An entry in that directory can also be a symlink to a Ruby version installed elsewhere on the filesystem. rbenv doesn't care; it will simply treat any entry in the versions/ directory as a separate Ruby version.

Once you've installed some Ruby versions, you'll want to install gems. First, ensure that the target version for your project is the one you want by checking rbenv version (see Command Reference). Select another version using rbenv local 2.0.0-p247, for example. Then, proceed to install gems as you normally would:

Check the location where gems are being installed with gem env:

As time goes on, Ruby versions you install will accumulate in your ~/.rbenv/versions directory.

The ruby-build plugin provides an rbenv uninstall command to automate the removal process.

The simplicity of rbenv makes it easy to temporarily disable it, or uninstall from the system.

Like git, the rbenv command delegates to subcommands based on its first argument. The most common subcommands are:

Sets a local application-specific Ruby version by writing the version name to a .ruby-version file in the current directory. This version overrides the global version, and can be overridden itself by setting the RBENV_VERSION environment variable or with the rbenv shell command.

When run without a version number, rbenv local reports the currently configured local version. You can also unset the local version:

Sets the global version of Ruby to be used in all shells by writing the version name to the ~/.rbenv/version file. This version can be overridden by an application-specific .ruby-version file, or by setting the RBENV_VERSION environment variable.

The special version name system tells rbenv to use the system Ruby (detected by searching your $PATH).

Sets a shell-specific Ruby version by setting the RBENV_VERSION environment variable in your shell. This version overrides application-specific versions and the global version.

When run without a version number, rbenv shell reports the current value of RBENV_VERSION. You can also unset the shell version:

Note that you'll need rbenv's shell integration enabled (step 3 of the installation instructions) in order to use this command. If you prefer not to use shell integration, you may simply set the RBENV_VERSION variable yourself:

Lists all Ruby versions known to rbenv, and shows an asterisk next to the currently active version.

Displays the currently active Ruby version, along with information on how it was set.

Installs shims for all Ruby executables known to rbenv (i.e., ~/.rbenv/versions/*/bin/*). Run this command after you install a new version of Ruby, or install a gem that provides commands.

Displays the full path to the executable that rbenv will invoke when you run the given command.

Lists all Ruby versions with the given command installed.

You can affect how rbenv operates with the following settings:

The rbenv source code is hosted on GitHub. It's clean, modular, and easy to understand, even if you're not a shell hacker.

A command line tool, manage your hundreds of repository, written with Rust

A command line tool, manage your hundreds of repository, written with Rust

An interactive shell environment for exploring the p2panda protocol

An interactive shell environment for exploring the p2panda protocol. Uses a mock node and clients to simulate network logic.

aoc-2021 Warning Spoiler Alert! If you want to solve the aoc problems on your own, do not read any further. This repository contains solutions for the

gm_environ Using Environment Variables in Garry's Mod. Installation Download a copy of the module from the releases (or compile from source) Move the 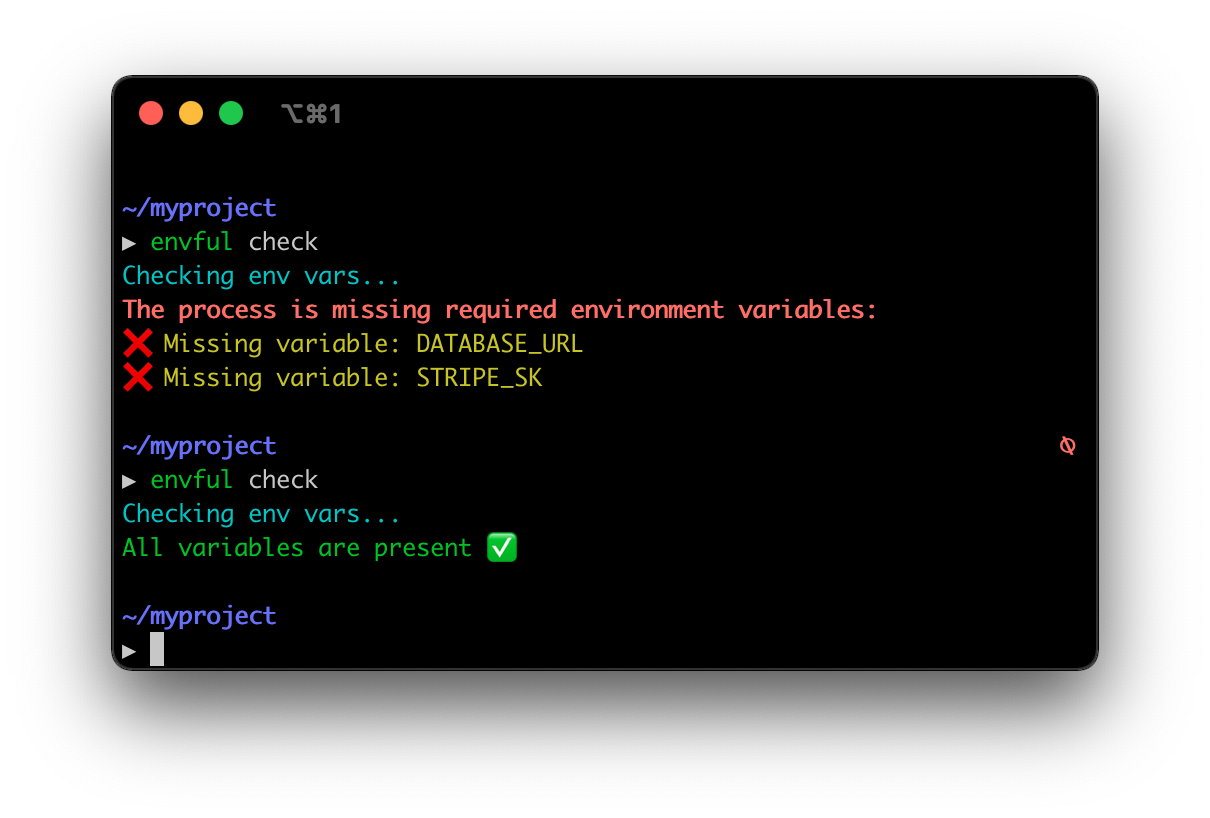 Envful is a CLI tool that verifies the presence of environment variables. It looks inside your .env file and the host system. You can use it to run any process while ensuring all the variables are set.

The application that can be used for personal usage to manage jira from terminal.

procs makes it easy to find and manage system processes

procs procs makes it easy to find and manage system processes. Right now, the main usage is finding processes by the ports it is listening on, but mor

QuiCLI Quickly build cool CLI apps in Rust. Getting started Read the Getting Started guide! Thanks This is only possible because of all the awesome li

A diff-based data management language to implement unlimited undo, auto-save for games, and cloud-apps which needs to retain every change.

Docchi is a diff-based data management language to implement unlimited undo, auto-save for games, and cloud-apps which needs to save very often. User'

🐢 Atuin replaces your existing shell history with a SQLite database, and records additional context for your commands

Atuin replaces your existing shell history with a SQLite database, and records additional context for your commands. Additionally, it provides optional and fully encrypted synchronisation of your history between machines, via an Atuin server.

Save image from your clipboard 📋 as an image file directly from your command line! 🔥

Clpy ?? Save copied image from clipboard as an image file directly from your command line! Note It works only on windows as of now. I'll be adding sup