This is my attempt to build an input method editor using only Rust. It's not the first, and definitely not the last.

The goal is to create an input method editor that allows the user to type Vietnamese text on the computer. Using either VNI or TELEX method. Other than that, no other feature are planned.

But you can get the source code and compile it yourself, it's very easy:

After this, you'll find the Gõ Key.app file in the target/debug/bundle folder. 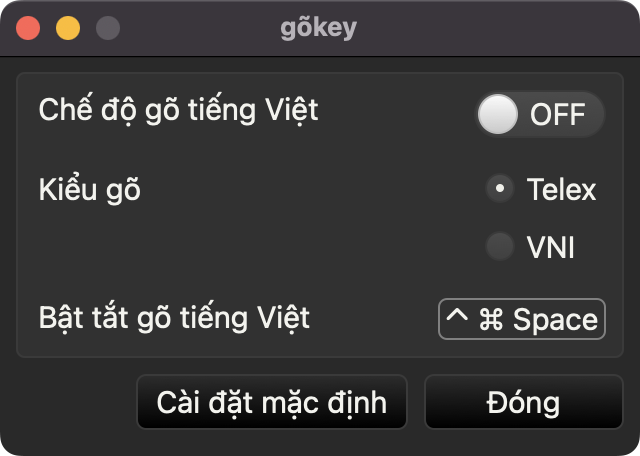 Currently, only macOS is supported. Windows and Linux can be supported later but it's not in the roadmap. If you're on these OSes, any help would be greatly appreciated!

This project will only focus on the input handling logic, and provide a frontend for the input engine (vi-rs).

The following diagram explains how goxkey communicates with other components like OS's input source and vi-rs:

On macOS, we run an instance of CGEventTap to listen for every keydown event. A callback function will be called on every keystroke. In this callback, we have a buffer (TYPING_BUF) to keep track of the word that the user is typing. This buffer will be reset whenever the user hit the SPACE or ENTER key.

The input engine (vi-rs) will receive this buffer and convert it to a correct word, for example: vieetj will be transformed into việt.

The result string will be sent back to goxkey, and from here, we will perform an edit on the target application. The edit is done using the BACKSPACE technique. It's unreliable but it has the benefit of not having the pre-edit line, worth it.

To get yourself familiar with IME, there are some good article on the topic:

To setup the project locally, first, checkout the code and run the install script to have all the Git hooks configured:

After this step, you can use the make commands to run or bundle the code as needed: